It was six o'clock in the afternoon on the hot summer day of August 11th, 1950; the eyes of the entire chess world looked over the ancient stone walls of an old charming town on the Yugoslavian coast. The historic city of Dubrovnik, FPR Yugoslavia (present day Croatia), was hosting the Ninth Chess Olympiad; more than 80 chess players from 16 different countries around the world were in attendance, all eager to wear the world’s most prestigious chess crown. Euwe, Najdorf, Bolbochán, Rossolimo, Evans, Donner, Schmid, Unzicker, Pirc, Gligorić, Trifunović, Rabar, and Vidmar Jr. -- each took their seat behind large wooden chess tables in the Art museum of Dubrovnik.

The heat was unbearable; not even the oldest inhabitants of the city had experienced a heat wave of this intensity, however, this did not stop the highest Yugoslavian political figures and FIDE members from attending the opening ceremony. A rich cultural program, followed by speeches of encouragement, formed the opening ceremony, which was observed by many spectators. The crowd was excited and restless, anxious to kick-off the main event, which had its beginnings almost two years prior.

In 1948, a FIDE congress took place in the Swedish town of Saltsjöbaden; nine years had passed since the last Olympiad (Buenos Aires, 1939), and the world had changed quite a bit (to say the least). As a result of the events taking place between 1939 and 1948, the world was divided, and for this reason Yugoslavia offered to host the Ninth Tournament of Nations; this offer was, however, desperately opposed by the Soviet delegation. Despite its protest, the Soviet opposition was defeated in the congress; as a result, the Communist Information Bureau (the “Cominform”) decided that the Soviet Union would boycott the Yugoslavian hosted event, which is why its team did not participate (along with several other countries, from the Soviet Bloc). The Iron Curtain had taken its unfortunate toll.

Marshal Tito, the political leader of Yugoslavia, understood the opportunity presented by the Olympiad; his administration was deeply involved in its organization, and this resulted in the creation of one of the finest tournaments to date. The players were ensured perfect playing conditions, the media had exceptional access to the tournament, and the citizens of Dubrovnik were so close to the games they could breathe alongside the players.

A number of teams were considered serious contenders for the gold medal; team Yugoslavia lead by Svetozar Gligorić, USA with Reshevsky and Horowitz, Argentina with (former Pole) Miguel Najdorf, and Holland led by Max Euwe. All top players and all aspiring to earn a medal for their country.

On that hot summer afternoon, top players from around the world were seated across from each other at chess tables spread across the three main halls of the Dubrovnik art museum, while they listened to the crowd outside the building anxiously wait for the tournament to begin. Every move the gold medal contenders made was played, in parallel, on giant chessboards stationed in the Dubrovnik city square for spectators of the tournament to see and follow along; each move was also carefully annotated for magazines, which analyzed the games and published interesting facts about the tournament, on a daily basis. The Ninth Chess Olympiad in Dubrovnik had finally begun. 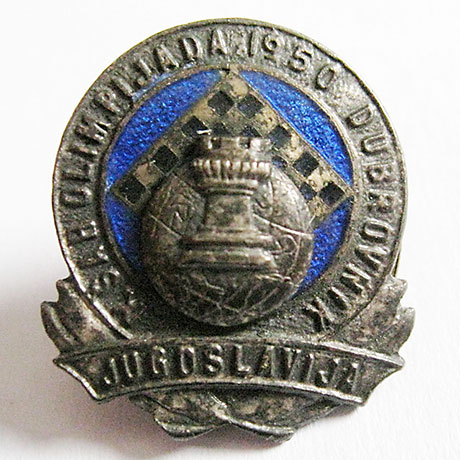 In honour of IX chess olmypiade special series of stamps was issued. Collection is highly appreciated among stamp collectors society.

The Olympiad was held between August 20th and September 11th, 1950. In a period of just three weeks, 480 matches were played, ultimately resulting in a Yugoslavian victory; Yugoslavia claimed its first and only championship, and proudly so on home soil. Gligorić lead the Yugoslavians to a well-deserved win, which, aside from being marked with consistent results, saw as many as five opposing teams sent home with scores of 0-4. Yugoslavia relied mainly on its top four comprised of Gligorić, Pirc, Trifunović, Rabar; Rabar and Trifunović won gold.

Although Yugoslavia won the tournament, Argentina’s performance was great, too; three Argentinian players won individual gold medals, and one won bronze. The Argentinians lost only four games in total, and their top two boards did not lose a single game; they were a serious contender, to say the least!

It was no surprise to see the young German squad place highly; Unzicker proved himself to be a true leader, winning individual gold at first board (which he shared with Najdorf), and his talent was proclaimed to be the discovery of the tournament.

The USA’s performance was quite disappointing, which saw them finish just outside the medal zone. It is interesting to note that the USA was undefeated in the Olympiad (the only undefeated team in the tournament), which is the only case in history where a solely undefeated team failed to win the competition.

Holland, with ex-world champion Max Euwe, placed fifth, which is exactly where they were expected to finish. The young Johannes Donner started his long Olympic career with a respectable result.

Belgium finished (a bit surprisingly) in 6th, with major contributions from their top board, Albéric O'Kelly.

France, supported by Tartakower, hoped for more, but their top star was 63 and far beyond his prime. WIM Chantal Chaudé de Silans played for France; she was the first woman to appear at the Chess Olympiads.

Peruvian star IM Esteban Canal did not, unfortunately, play much better than his teammates, and Peru landed in 14th place, near the bottom of the table.

The Dubrovnik event was the last Olympiad with a true battle for gold; the Soviet era was fast approaching, and the rest of the world would soon face a demoralising struggle for second place. 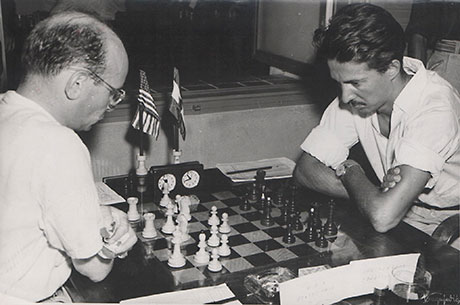 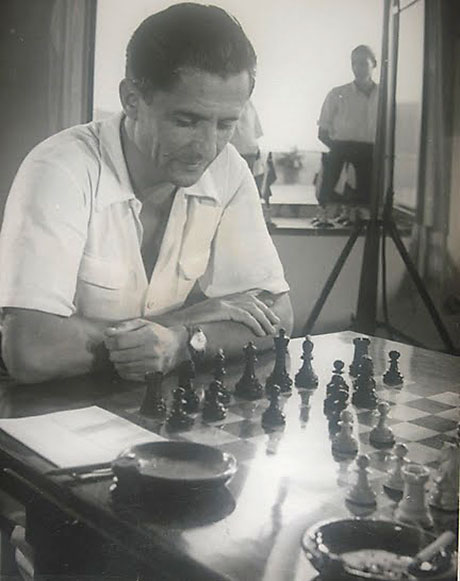 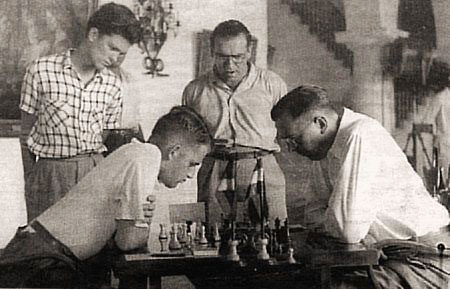 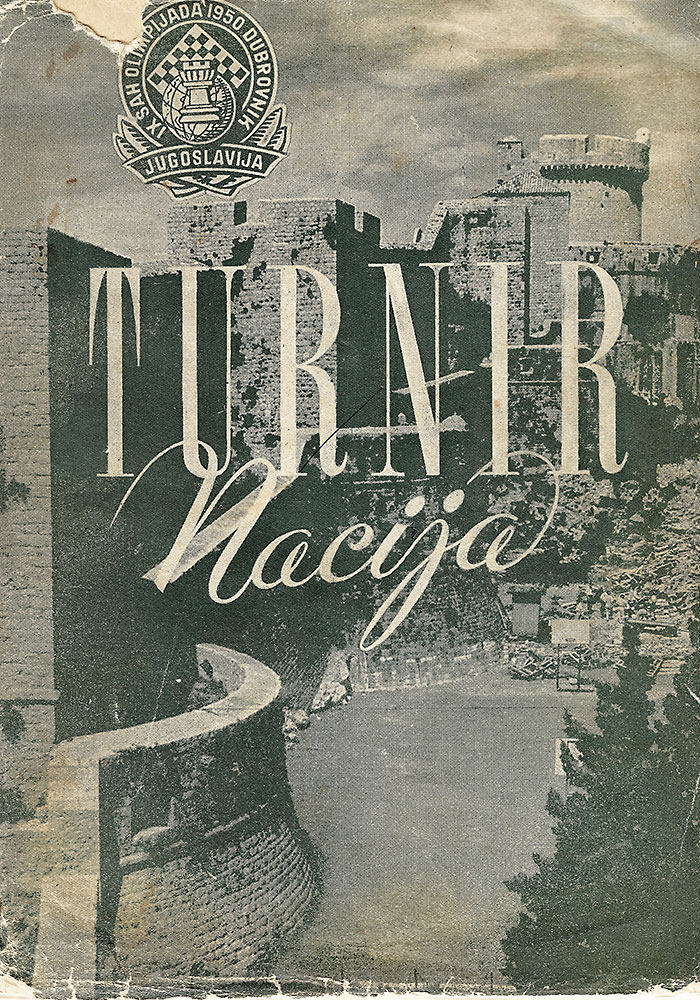 A book Tournamant of Nations was issued soon after IX. Chess Olympiad 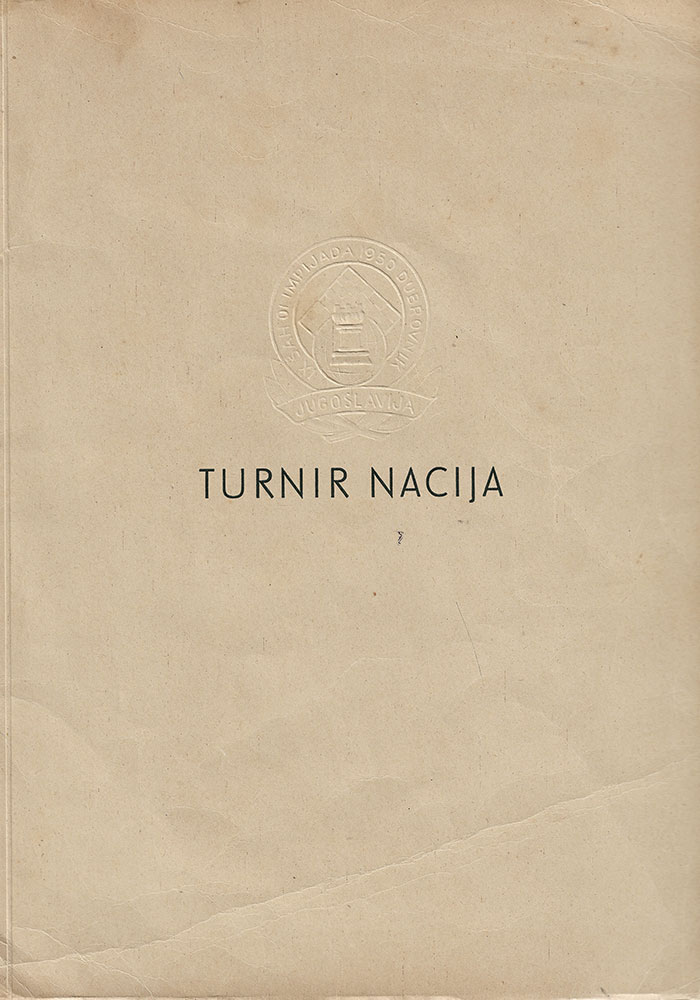 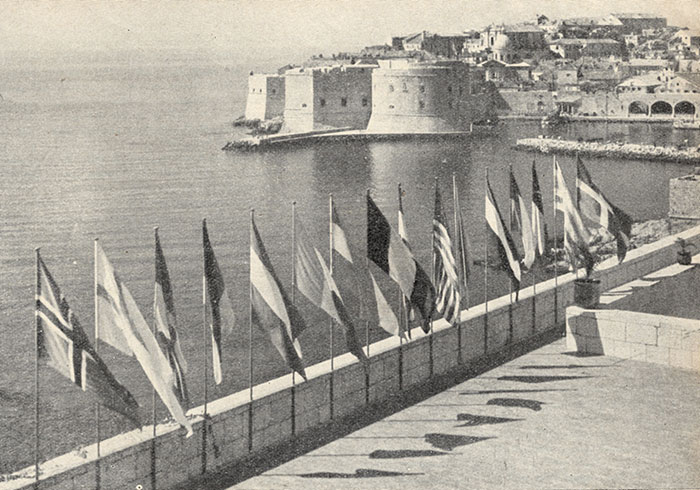 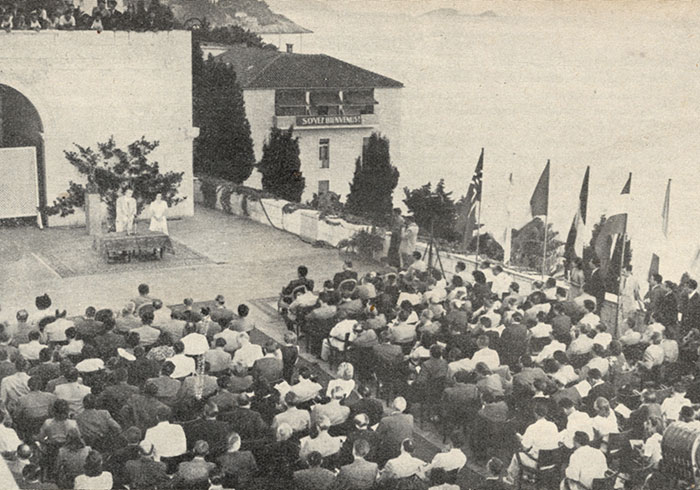 Opening ceremony where dr. Max Euwe spoke in behalf of players. Event was live broadcasted by radio and filmed for Yugoslav film archive. 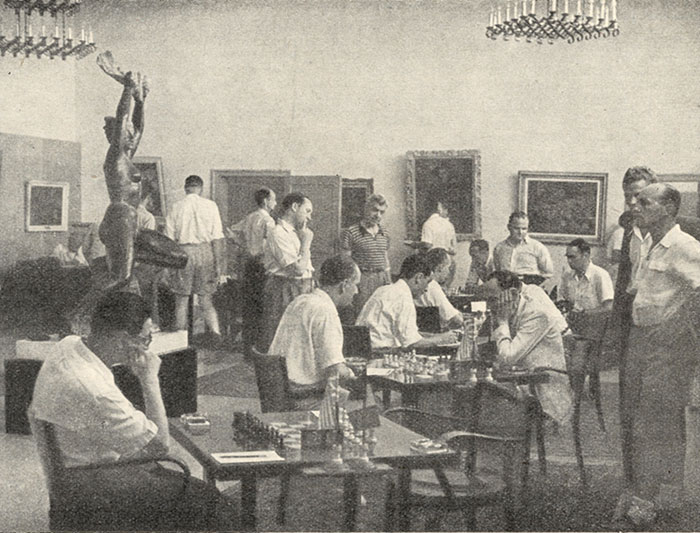 First round, Belgium vs. Greece. Match was played on the first floor of Dubrovnik art museum and Belgium team won 3:1 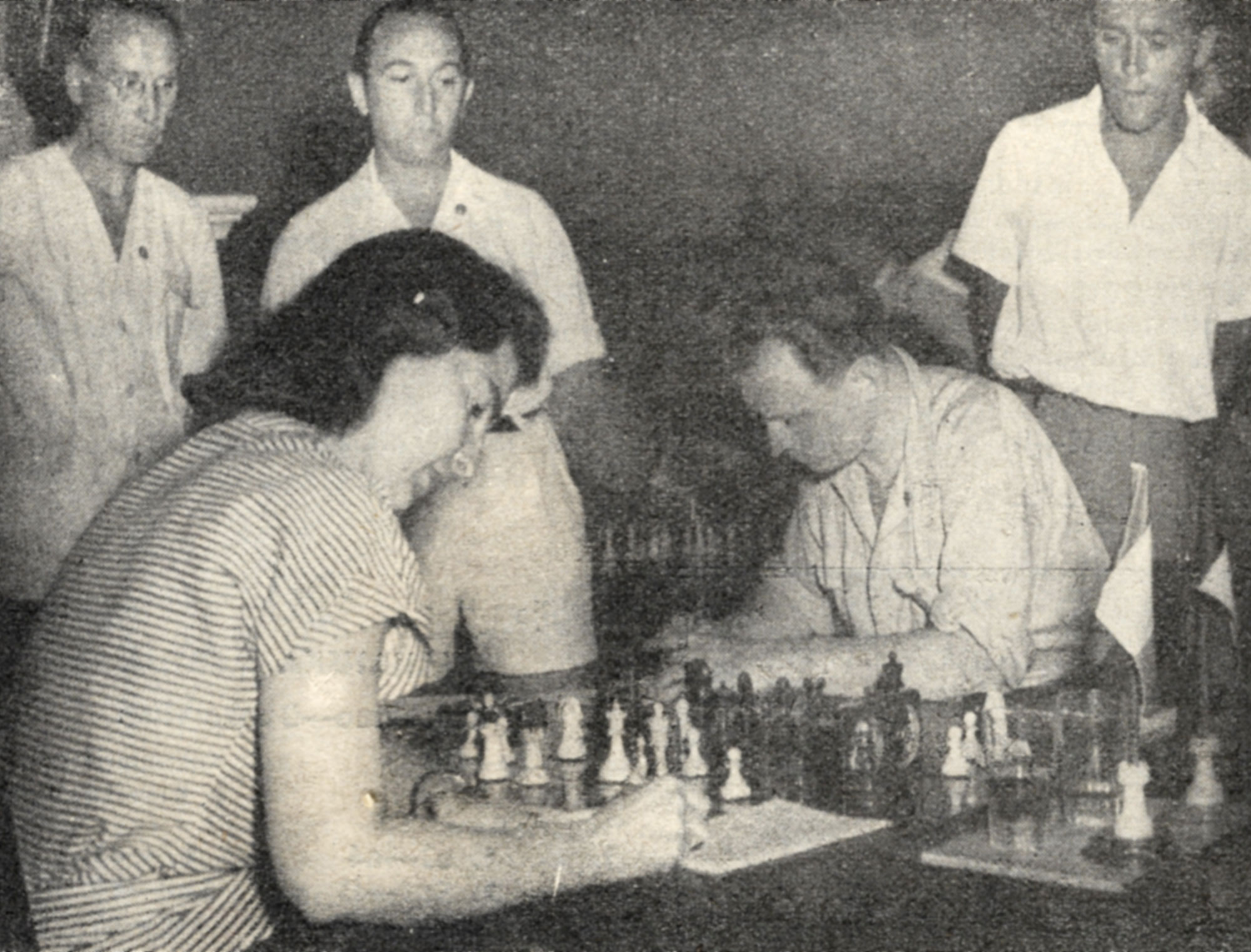 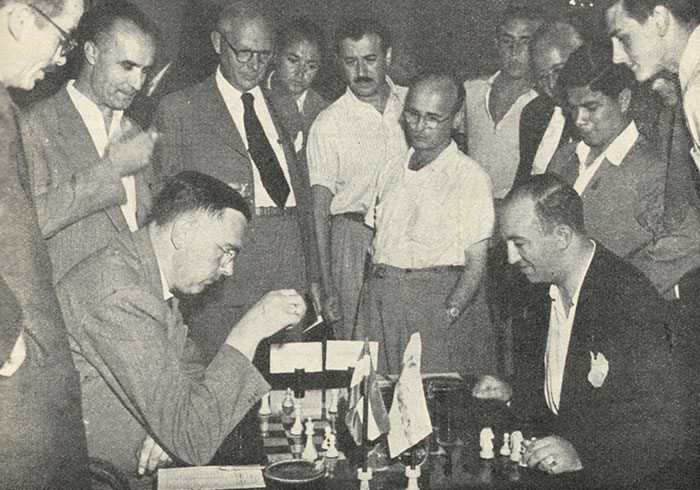 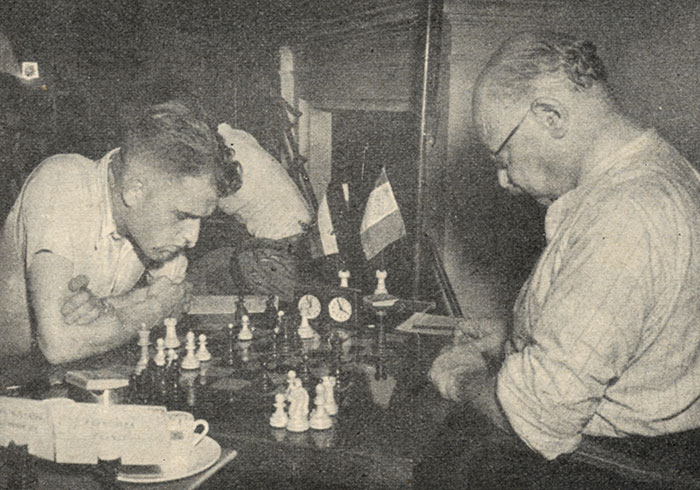 Wolfgang Unzicker (West Germany) was the biggest discovery of the tournament. On photo playing and winning over GM Tartacover 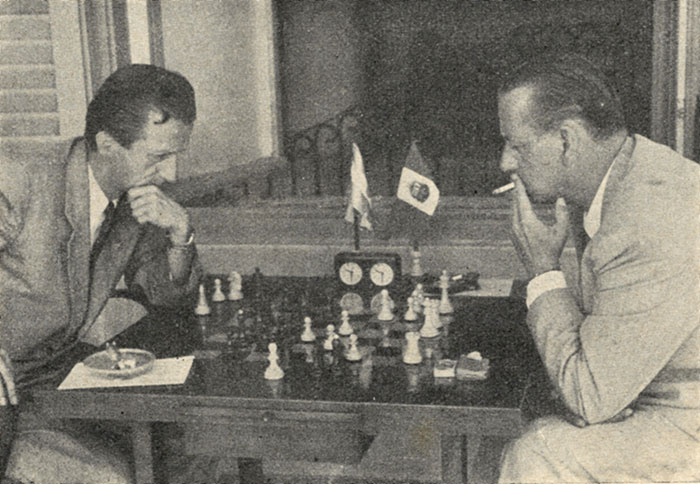 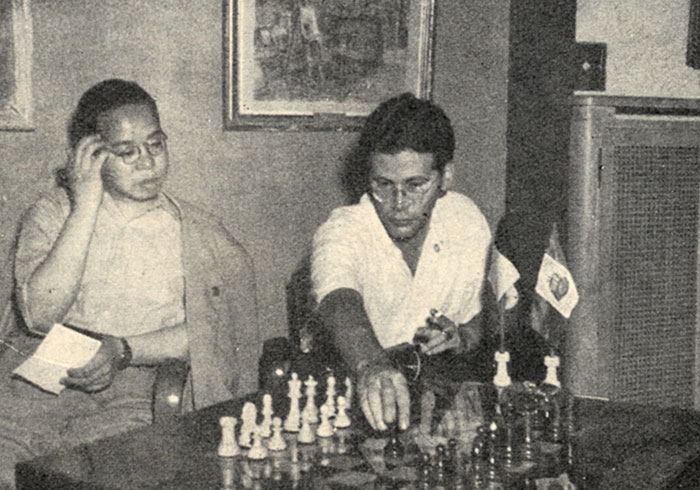 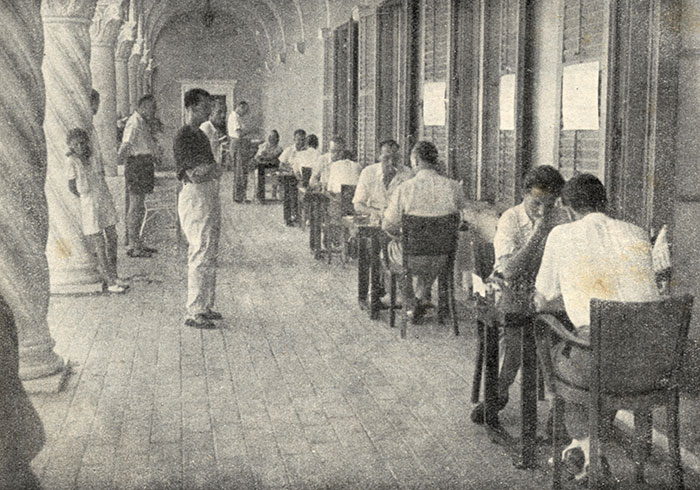 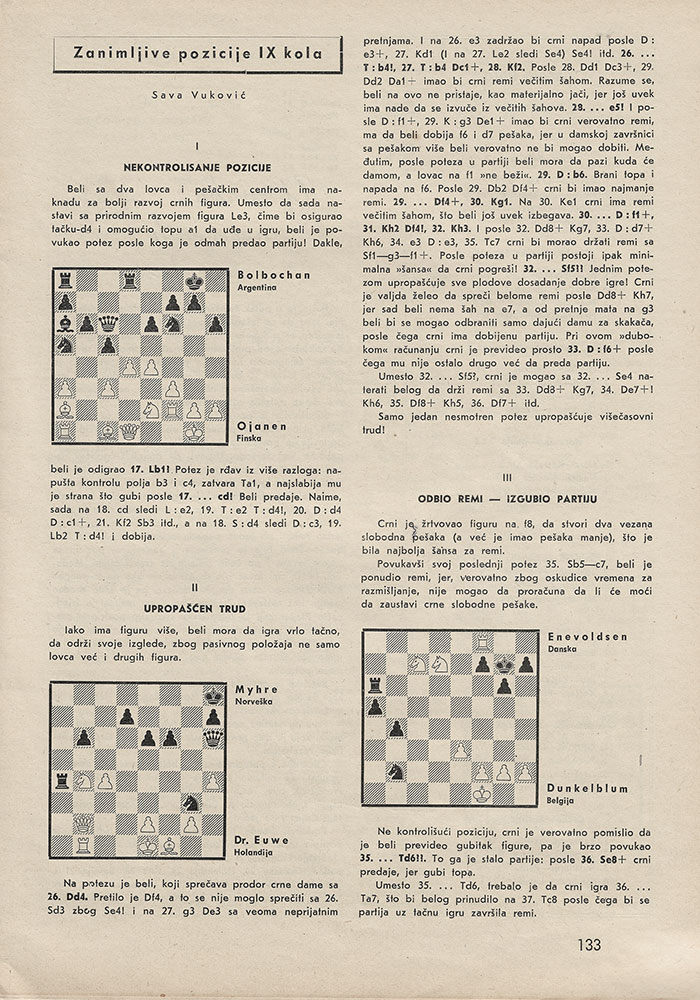 Games were detaily analyzed round by round by different chess experts. 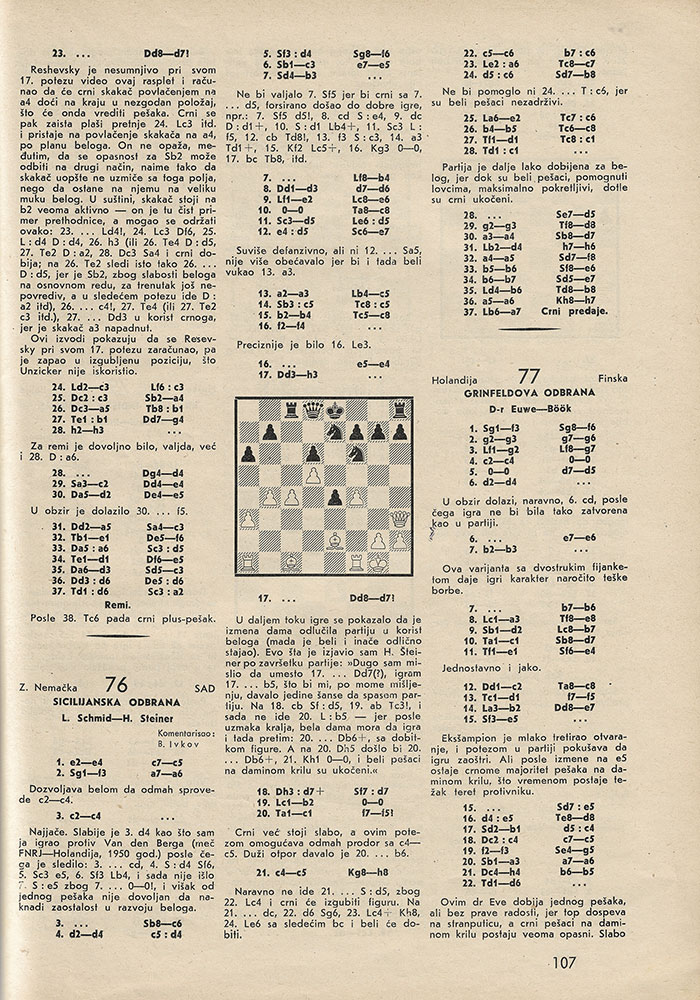 Book »Tournament of Nations« was published by Yugoslav chess federation 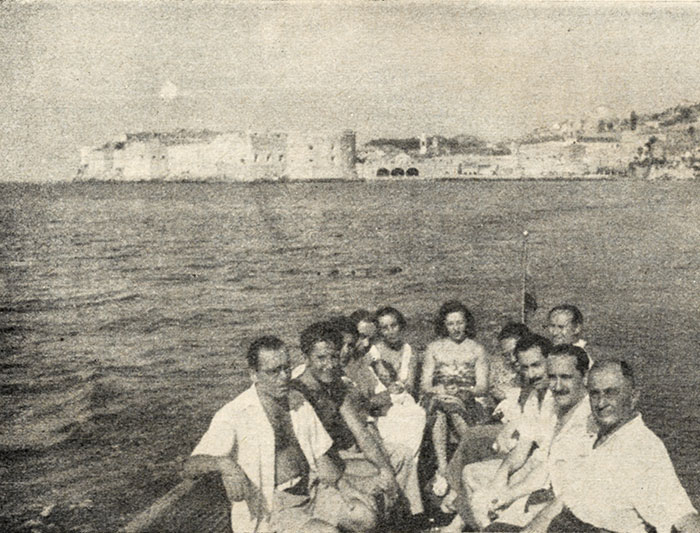 Players relaxing between matches. On photo boat trip to island Lokrum near Dubrovnik. 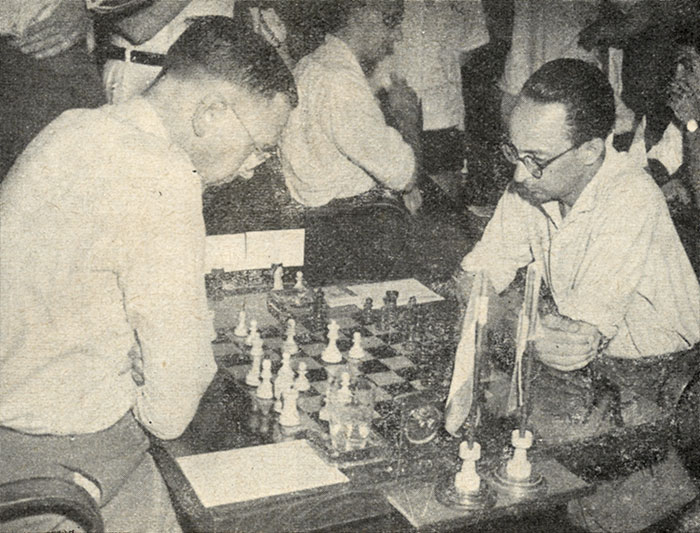 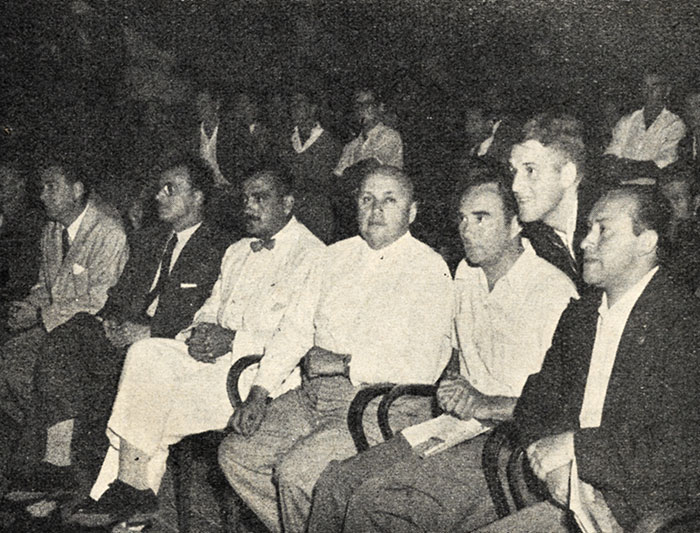 Players (Unzicker, O'Kelly and others) observing exciting matches of last round. Argentina still had chances for winning tournament in case of Yugoslavian fail against Finland. 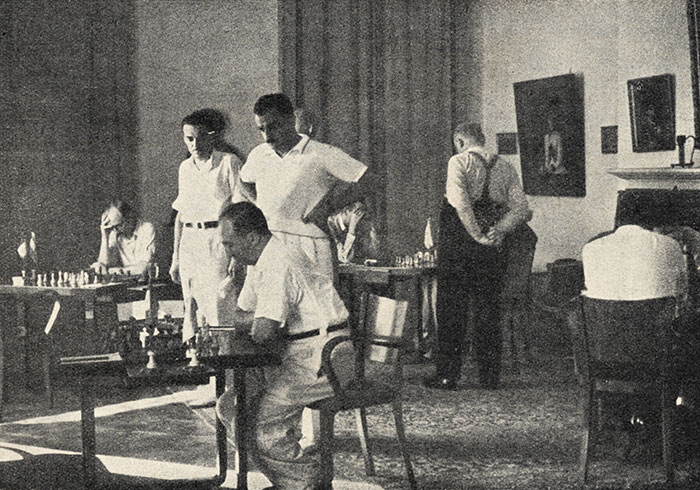 Exciting last round, Argentina vs. France. Argentinian players (all seated behind tables) were higly motivated to catch Yugoslavian team, however they ended with total score of 43 ½ which was two points less then the winning home team. 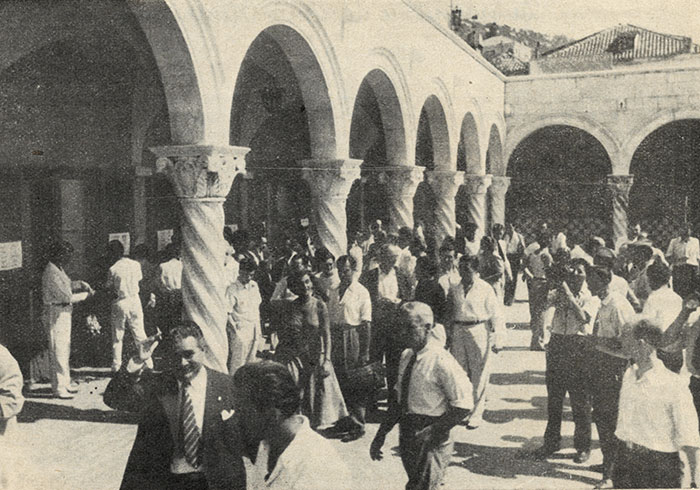 Tournament is finished and participants are leaving magnificant Art gallery in Dubrovnik. 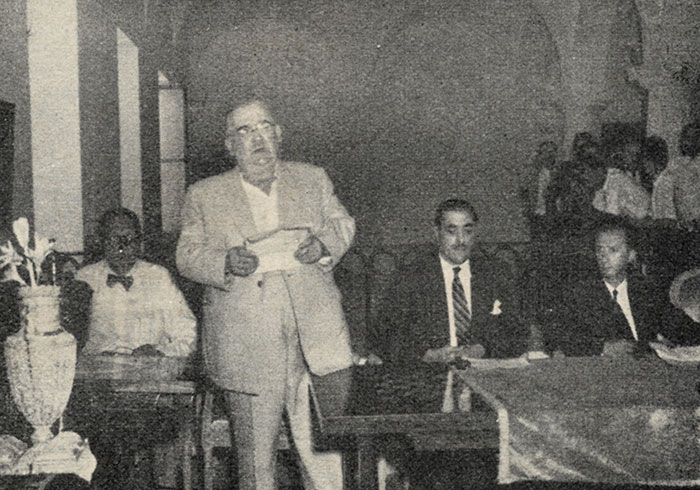 It was 11th of September at 11.00 when chief arbiter GM Milan Vidmar reported official results. Winning team was rewarded with big applause of competitors. 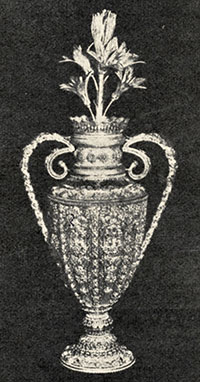 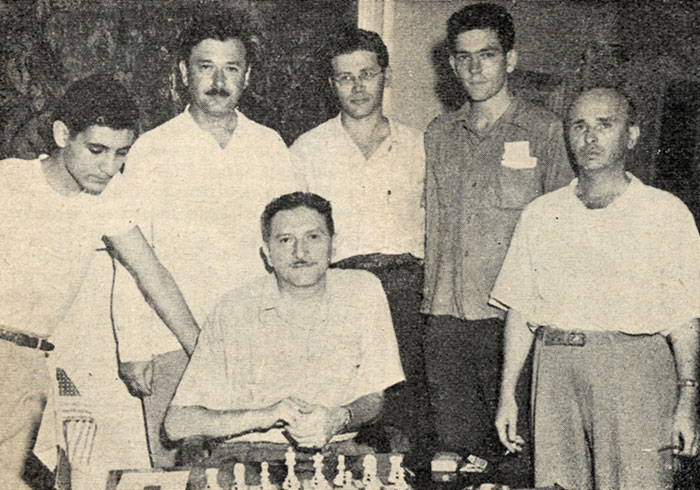 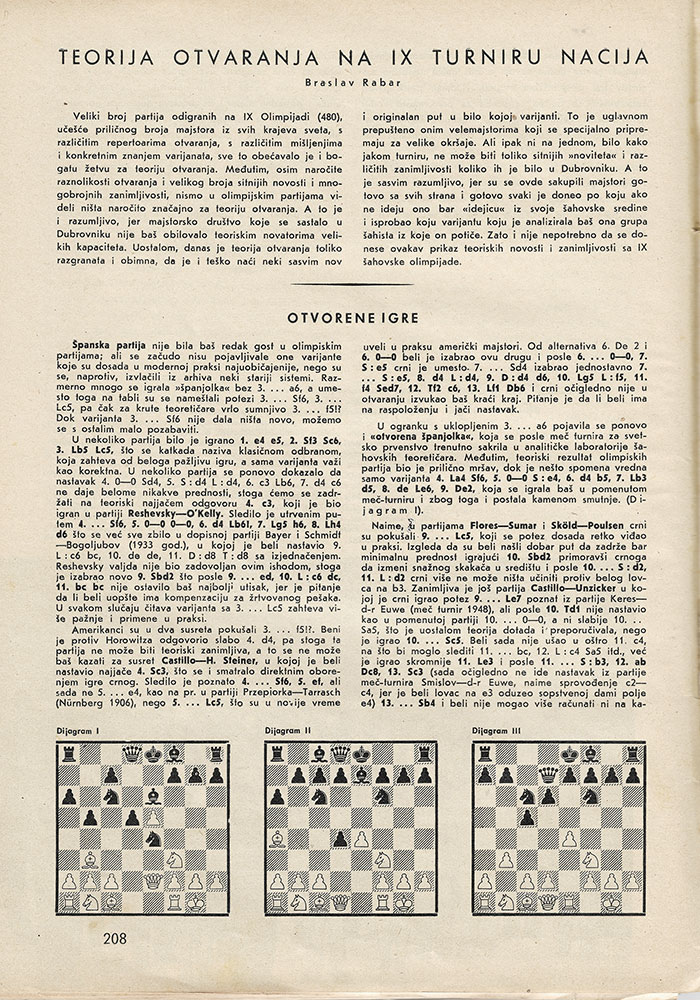 Section of the book with analysis on openings theory 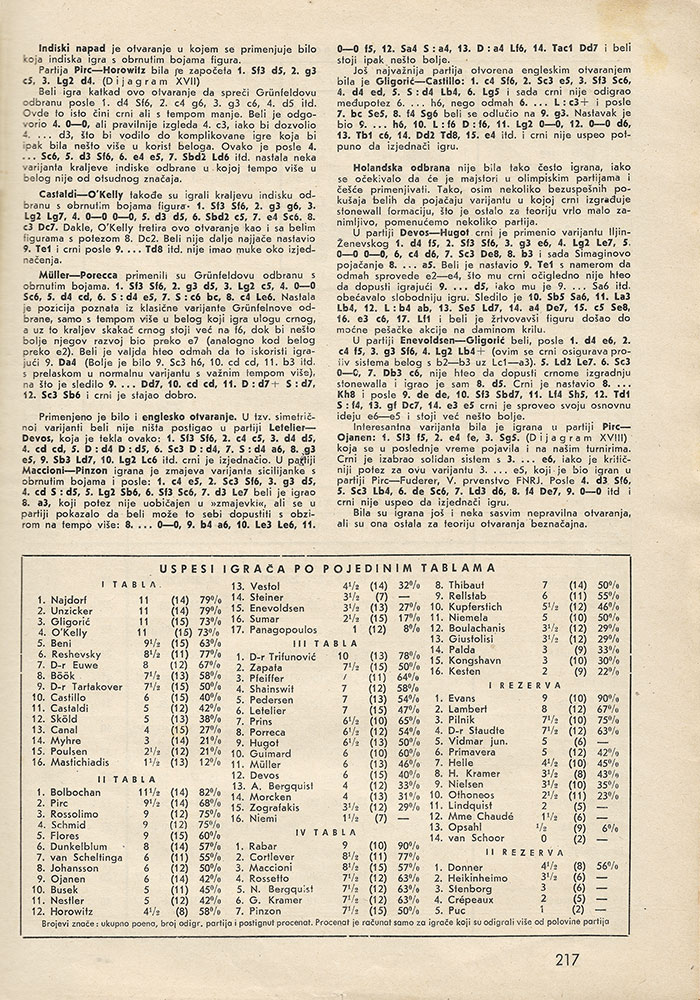 Players results on page 217 of »Tournament of Nations« book. 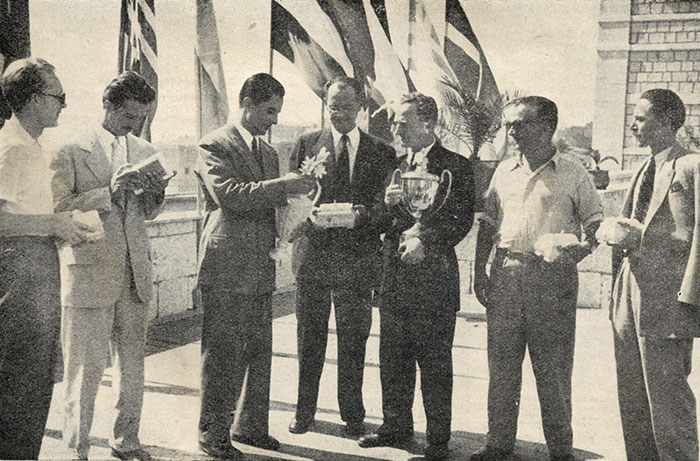 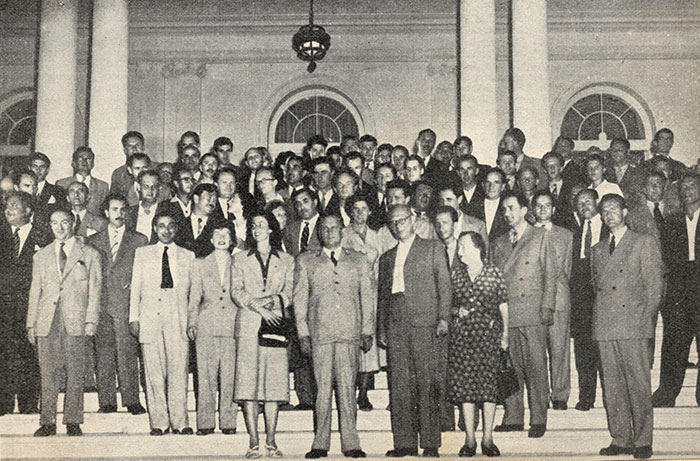 On 12th of September players arrived in Belgrade for a meeting with Yugoslavian president Marshal Tito. Airplane was send to Dubrovnik to pick up players and flew them into magnificant White palace in Belgrade. Tito hosted players for several hours. Different topics were covered during conversation among which Marshal Tito repeatedly regreted the lack of time for his private chess studys. 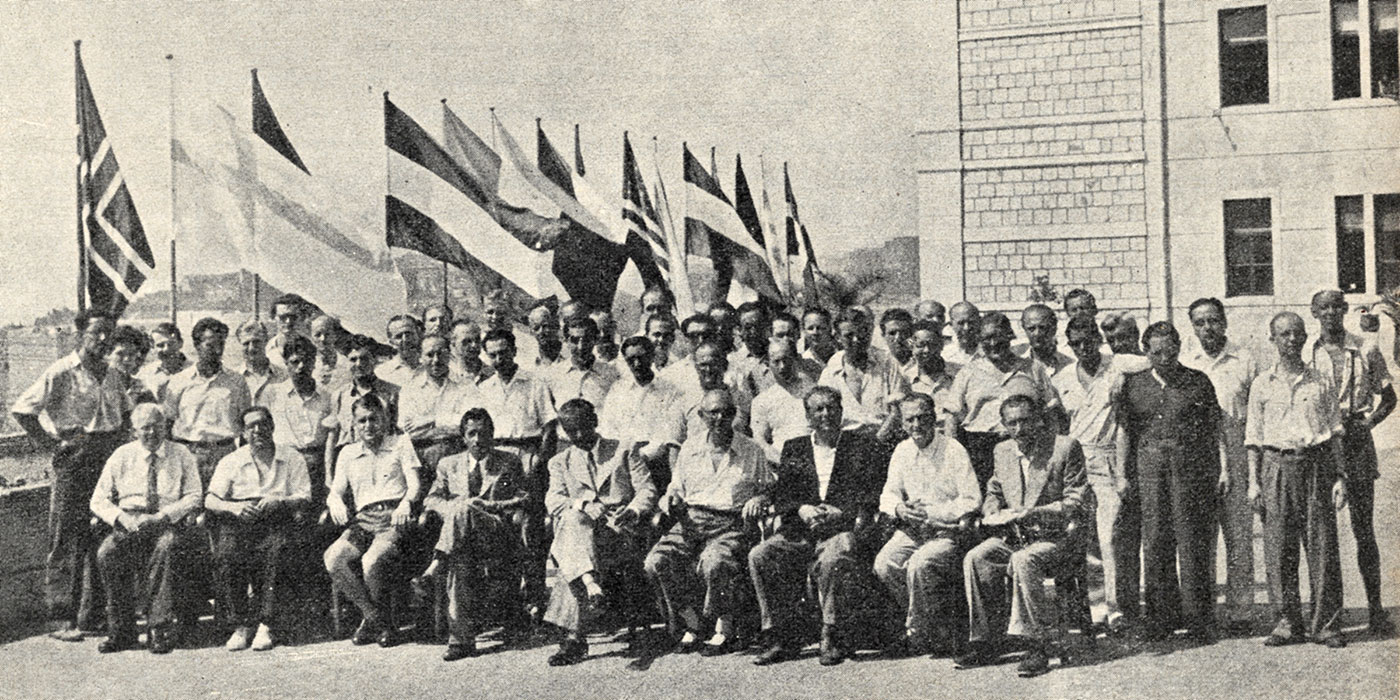 Players joined for last group photo at the end of the tournament. They all expressed deepest admirations regarding organization of event and beauty of Dubrovnik city.